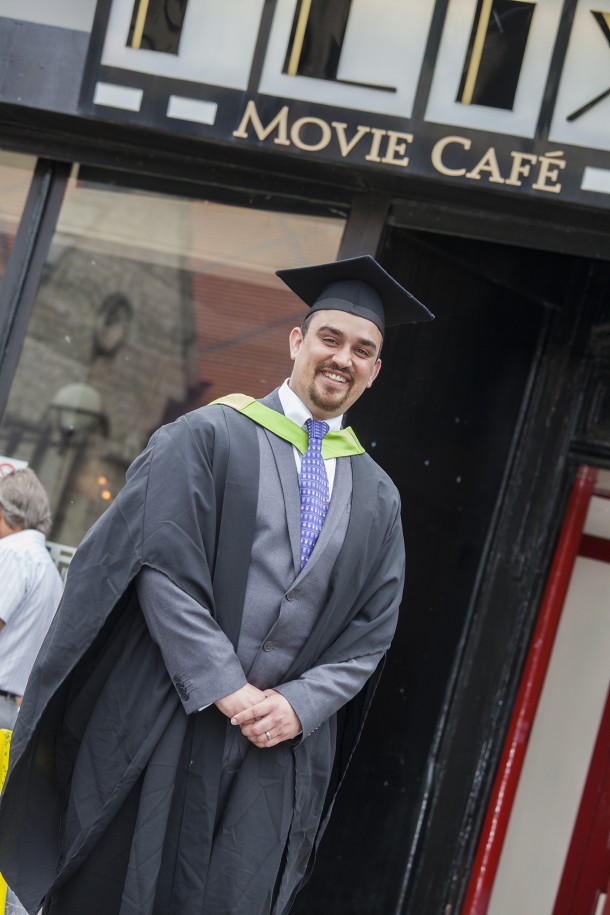 Students from CCAD celebrated their academic success as the second graduation ceremony got underway at the Christ Church in Hartlepool.

As the sun shone down, 120 students received their certificates in degrees ranging from Graphic Communications, Film, Textiles and Photography to Costume Interpretation with Design, Production Design for Stage and Screen and Fashion.

With proud families and friends watching on, the students were recognised for their hard work and academic achievement during their studies in a ceremony attended by local dignitaries and teaching staff across the whole College.

Adam Bouabda, 34, from Hartlepool, graduated with a first class honours in Creative Film & Moving Image Production, and also runs Flix Movie Café in the town. As part of his degree, Adam produced a new fan fiction movie which is now filming at locations across the north east, including Hartlepool Historic Quay. 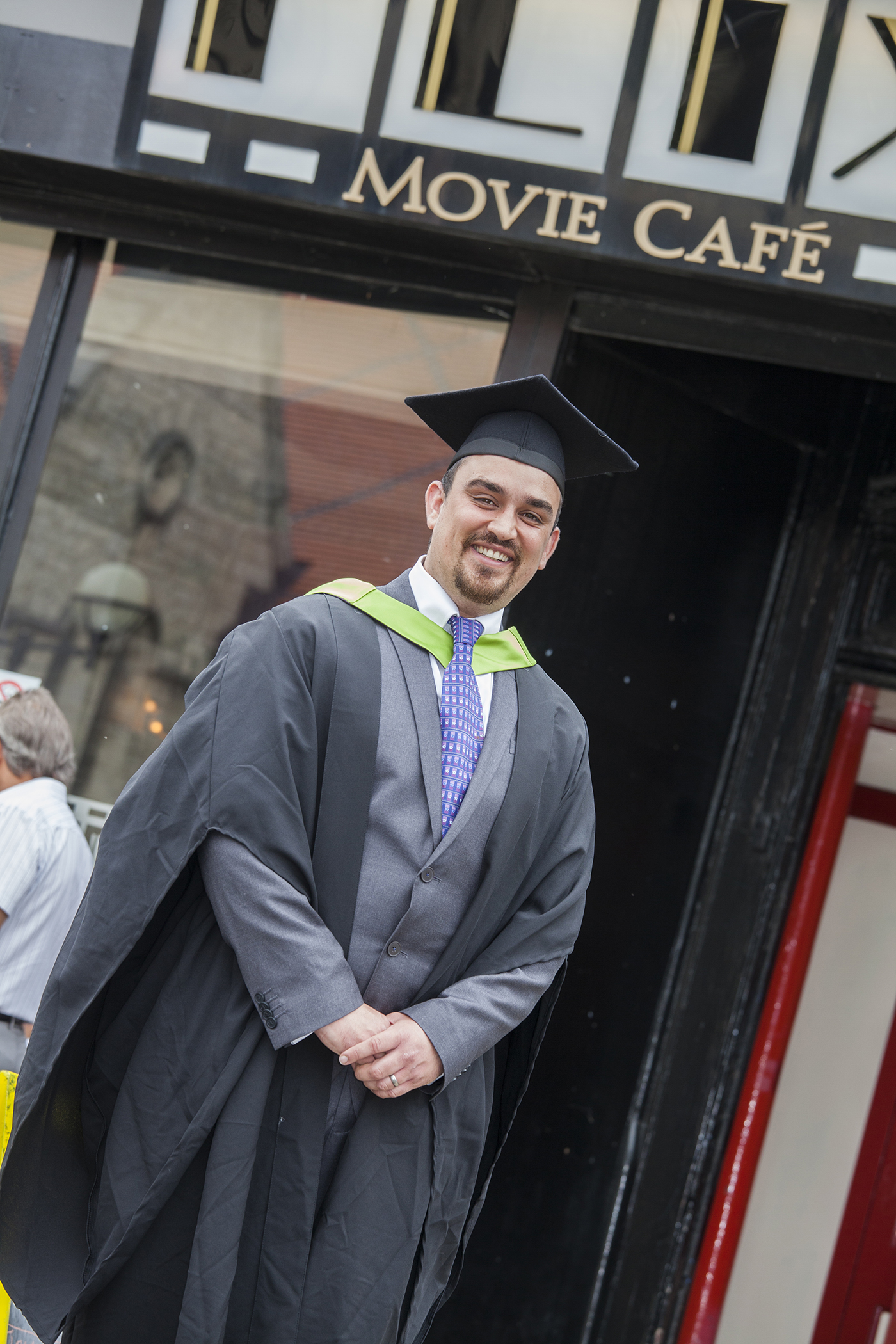 The short film, entitled ‘Ripper’, pits Jack the Ripper against Batman, and Adam already has numerous industry professionals on board, as well as actors from shows such as ‘Broadchurch’, ‘Downtown Abbey’ and ‘Game of Thrones’.

Father and daughter Andrew and Jenny Glazebrook from Tollesby in Middlesbrough both studied on the same course – Production Design for Stage & Screen – and had a double celebration as they graduated together. 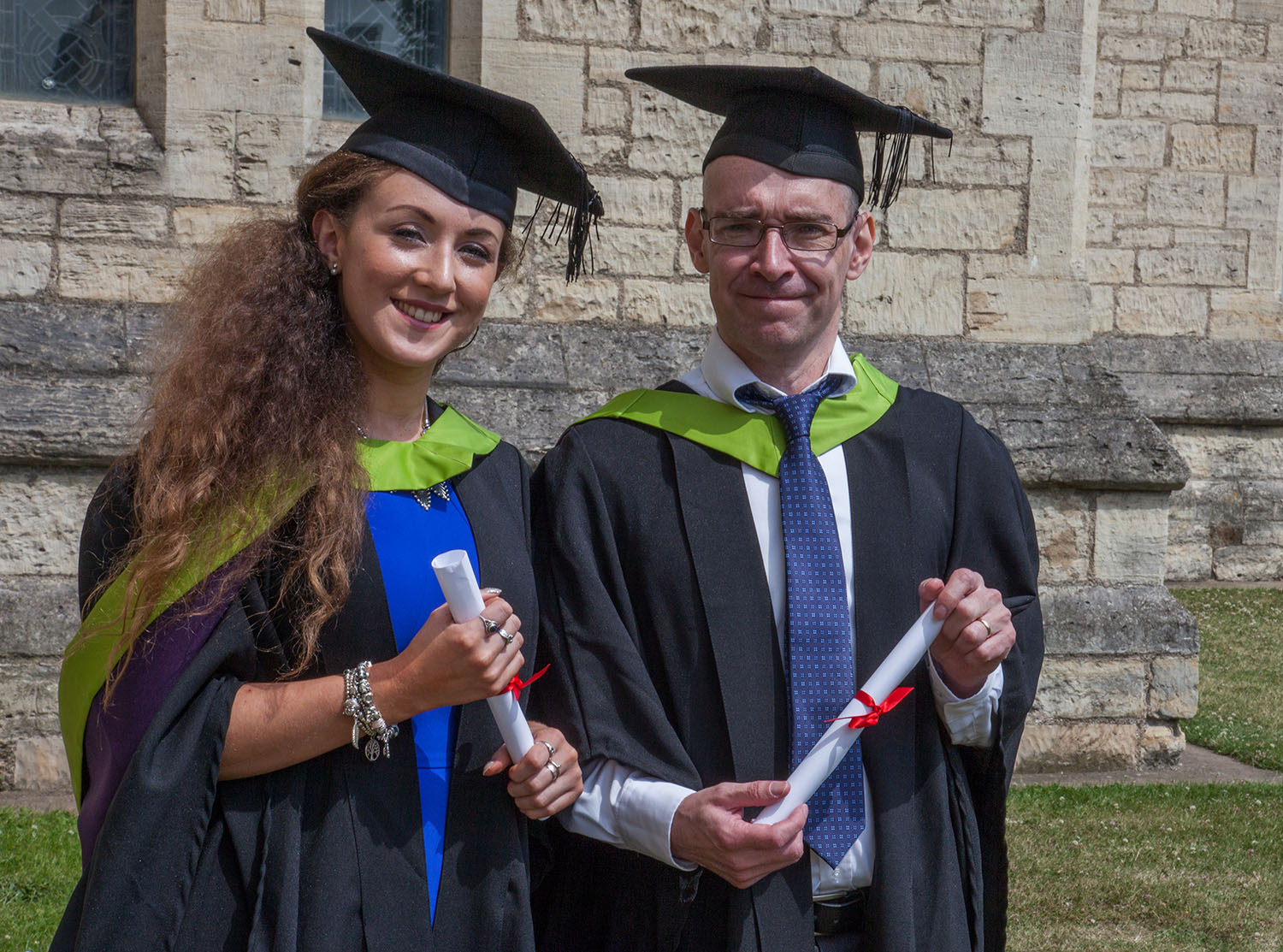 On graduating, 23-year-old Jenny, said: “It feels really great to graduate and we are both excited!” Andrew, 48 added: “It feels weird now it is all over but the three years has absolutely flown by so fast.”

Commenting on the challenges of studying together, Jenny said: “I encouraged Dad to do the course as I was studying elsewhere but we ended up on the same course together We have had our moments but we always helps each other out in the end and shared ideas. It was also interesting to see how different we are in terms of art styles, as Dad is very detailed and refined and I am quite free flowing!”

Andrew added: “It was a little weird when we first started and Jenny came into class and called me dad!

Following graduation, Jenny is now gaining experience in the film industry, working on short film ‘A Six and Two Threes’ and developing her network of industry contacts in London.

Andrew plans to develop his career as a freelance artist, and would like to take up a teaching role. He said: “Hopefully there will be more film studios opening up in the area in the future, as it is offers great work experience for students. We both want to work in north east and hope to boost the production design and film industry here.”

Graduating with a degree in Textiles & Surface Design was Callum Lovell, 23, from Whickham in Newcastle. He said: “I cannot believe it is really happening. It has been three long years but it is great to finally be here and it has been a long build up to this moment. At CCAD I have really enjoyed working with people that share the same goals and it was fun being in a creative, productive atmosphere. I am now looking into collaborating with other like-minded people and exhibiting some work of my own here in Newcastle.” 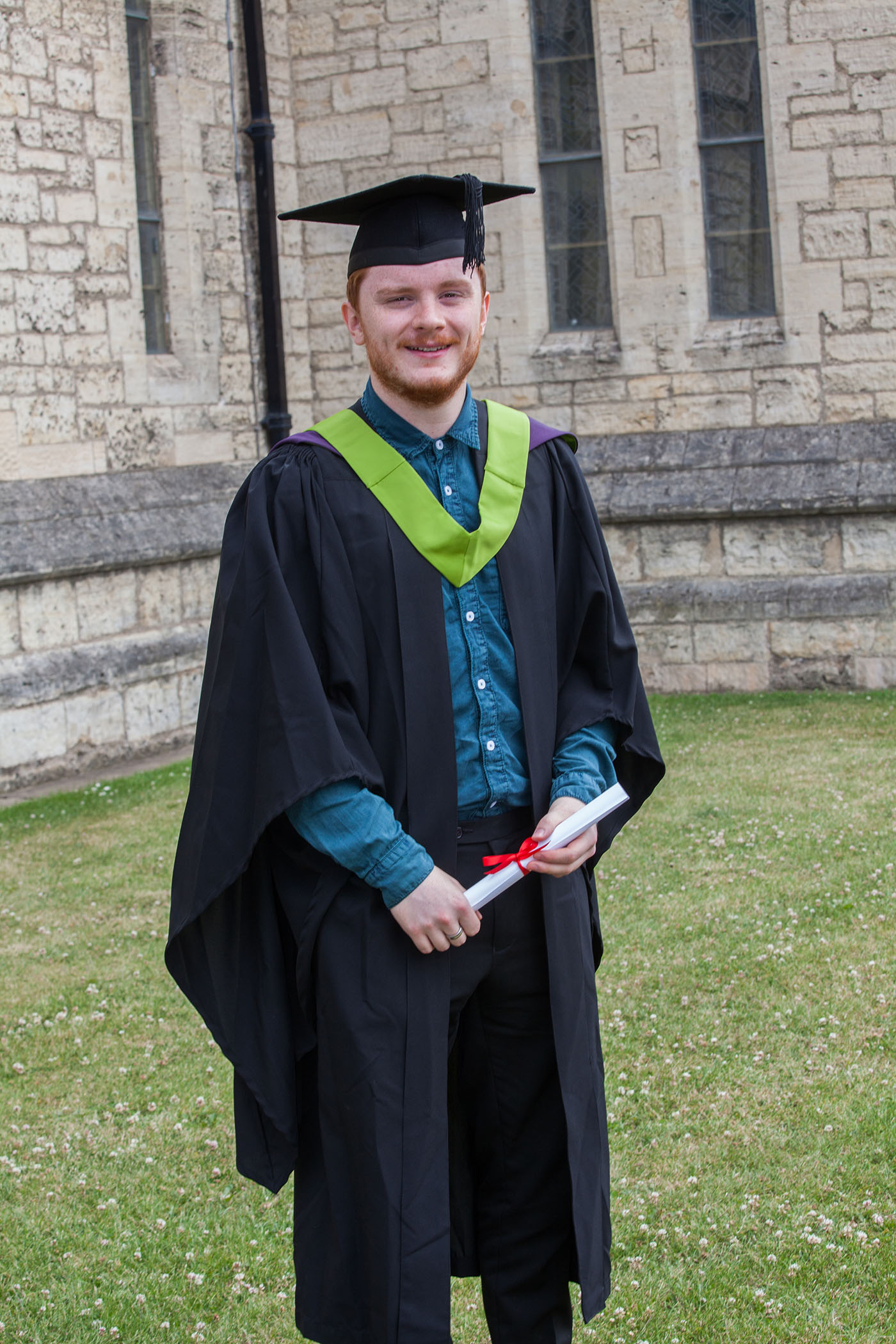 20-year old Rosie Hutchinson from Sunderland studied for her degree in Textiles & Surface Design. She said: “It feels absolutely brilliant to be graduating. Three years of hard work has finally paid off! It has been a great course. The trips that you do as part of the studies, such as London, France, Brussels and Amsterdam, are great. I got to work with companies like Hallmark and it brought so many amazing opportunities. My work has been exhibited at major design trade shows such as Texprint, and I was recently at the New Designers show, which was a brilliant week.”

Following graduation, Rosie plans to set up an interior design business, offering freelance design services with her own range of soft furnishings, including wallpapers. 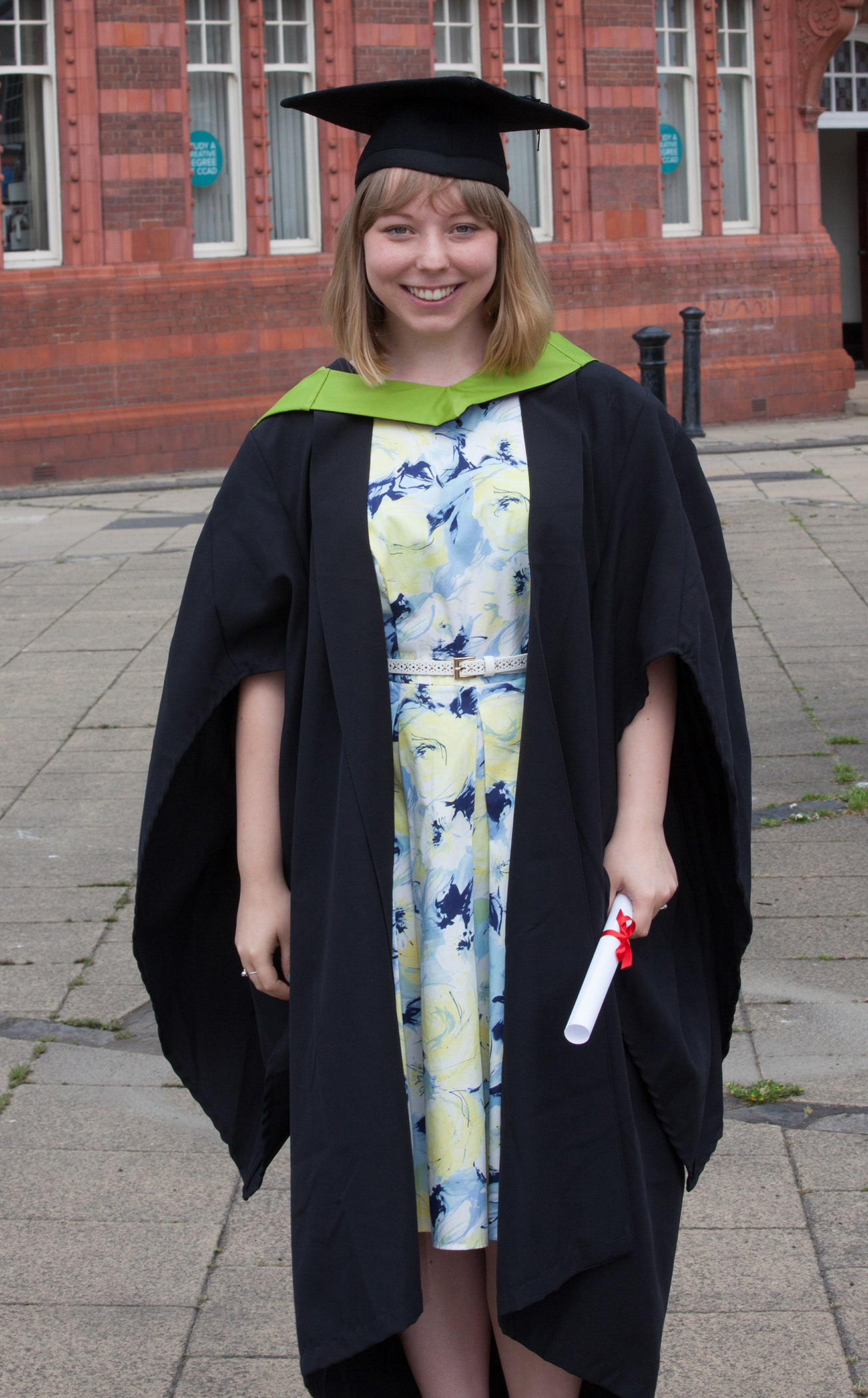 Martin Raby, Principal of Cleveland College of Art & Design, said: “It gives me great pleasure to see our 2015 students graduate at the awards ceremony in Hartlepool. It is not only an important day for graduating students, but also for their family members and friends who have supported them through their studies. The College has been a feature of life in Hartlepool for over 140 years and this is an important day for the College and for the town.” 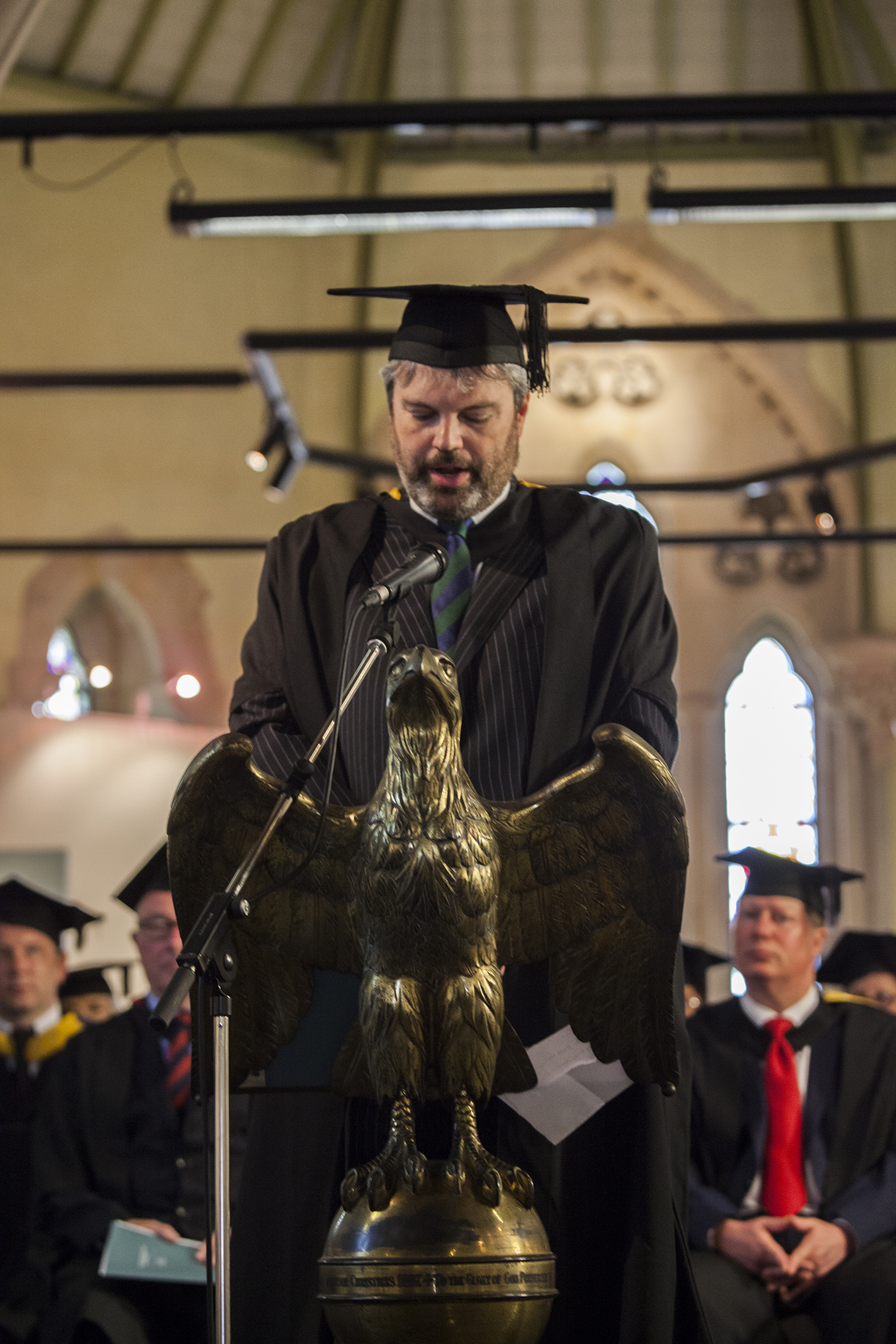 “On behalf of the College staff and Governors I offer my congratulations to each graduate and wish them great success in their future endeavours. I hope that they will keep in touch with us so that we know how our alumni are faring in the creative sector, and that occasionally they will return to visit us.”

Flowers for the graduation were provided by Angela Bell at Platinum Flowers. The bells of Christ Church were rung by The Hartlepool Bellringers after the final ceremony to congratulate all those who had graduated and to mark the occasion.