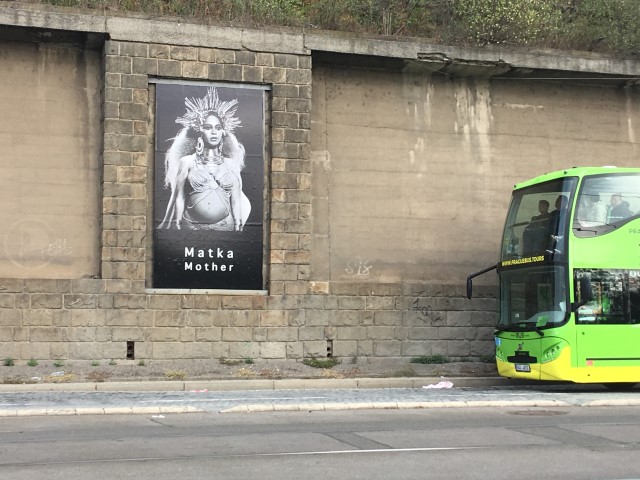 A space formerly used for communist propaganda in Prague is the venue for a series of giant images by a fine art lecturer at The Northern School of Art that seek to challenge populist representations of the mother.

Martina Mullaney, who teaches on The School’s Fine Art degree course, has included photographic images of the Duchess of Cambridge and Beyoncé alongside one of the Virgin Mary in her show at the Artwall Gallery in the Czech capital, which launched earlier this month.

Titled ‘Usually She is Disappointed’ the show includes five large-scale images mounted on an embankment wall, adjacent to a busy road, that seek to draw attention to the missing mother in art and culture. 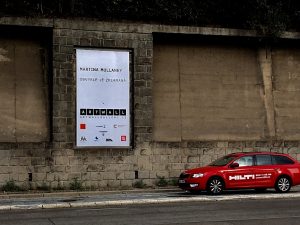 The exhibition connects to a wider body of Martina’s work that first started as a series of photographic posts on social media.

“The project is driven by my experience of how my practice had to change after I had my daughter, and the realisation that the support systems I needed weren’t there.  This made me angry so I set up public discursive events which mostly mothers attended, where we talked about the needs of artists with children.

“I used social media as a platform as a way to test my work and to connect with the community of artists and parents who no longer live in the major cities where they once studied and had promising careers.  This is because more often than not these cities can no longer offer them the support they need to survive as artist parents.”

“The posts mushroomed to become a new body of work for me and is what ‘Usually She is Disappointed’ emerged out of.  I used to work in darkrooms, where I hand-made prints and light boxes and installations but I now work on an iPhone at home after my daughter has gone to bed. My subject has changed to be much more about an investigation.

Martina says that the birth of her daughter led to a big change in her life as well as her practice as an artist.

“It was a big shift, but a good one as it really opened my practice up to other ways of working.  At the same time it was a painful shift because I’ve been quiet for a long time and I haven’t shown any work which is why I turned to social media. As an artist it’s important to engage with the world and also to have my work disseminated.”

The invitation to exhibit at Artwall in Prague provided a great opportunity for Martina to show her work as well as a challenge.

“I have amassed over 200 works in my collection for ‘Usually She is Disappointed’ but I had to choose five that would support the challenge my project is making for this site-specific work,” she continued.

The images she selected included one of the Duchess of Cambridge.

“I don’t think she is a real woman. I am asking is this who you are supposed to be as a mother? To give birth and come out of hospital the next day, in stilettos, your hair perfectly groomed, like you have just been to the toilet?

Due to the number of drivers and passengers who daily pass through the embankment, Artwall is one of the most visited Czech galleries.

“Artwall is a great space, it challenges the notion of the gallery and pushes work into a wider public context,” Martina added. “It also supports my teaching where I encourage students to show and disseminate their work in public spaces.”

‘Usually She is Disappointed’ by Martina Mullaney runs from 8 October – 23 November 2019 at Artwall Gallery in Prague. www.artwallgallery.cz/cs/vystava/martina-mullaney-obvykle-je-zklamana

Martina received a Masters in Fine Art from the Royal College of Art in 2004. Her work looks at uncomfortable social situations, mainly those of solitude. She has worked extensively with the homeless communities of Ireland and Britain, teenage mothers, and abandoned children in China. Participation and process are important elements of her practice, and she often collaborates with large groups of people to make her work.

In 1999, she was invited by the British Council to attend the International Artists Camp in Sri Lanka. Her first publication, Turn In, was published by Ffotogallery, Cardiff, Wales, in 2002. In 2003, she was artist-in-residence at the Loft Gallery in Kunming, China. In 2005, she will have her first solo show in New York at Yossi Milo Gallery. Her work has been published by Portfolio: Contemporary Photography in Britain, Source Magazine, Belfast, and Zoom, Italy. It has been reviewed by Afterimage, New York and the Sunday Times, Dublin. She is currently represented exclusively by Yossi Milo Gallery in New York.