LAURA’S DESIGN IS THE ABSOLUT BEST! 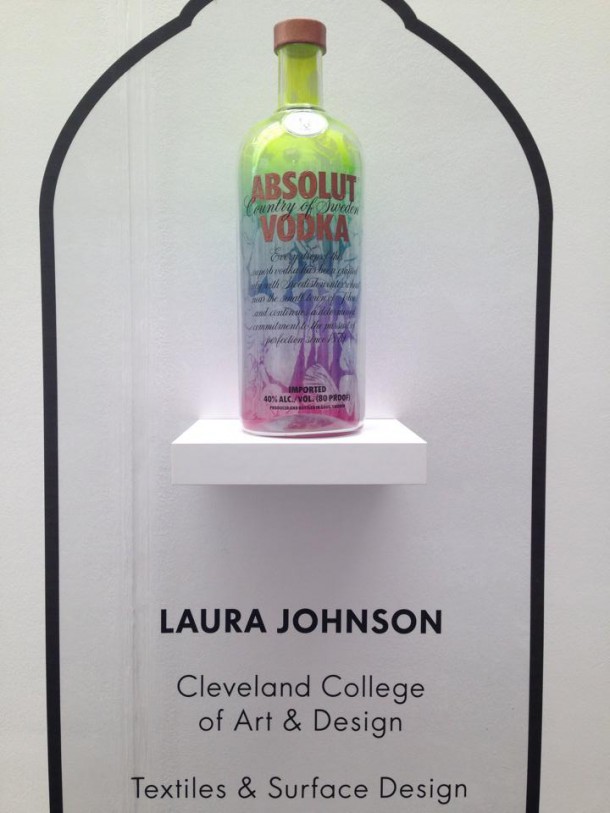 A graduate from Cleveland College of Art & Design (CCAD) has proved herself to be the ‘Absolut’ best at design after winning a national competition by leading brand, Absolut Vodka, at this year’s New Designers exhibition.

Laura Johnson, 23 from Blaydon in Newcastle has just completed her degree in Textiles & Surface design at CCAD’s university level campus in Hartlepool, and during her final studies she attended the New Designers show in London’s prestigious Design Centre.

As part of the New Designers show – where over 3,000 of the most promising graduate talents from Britain’s leading design courses exhibit – Laura entered Absolut’s competition, now in its fifth year, to create a new design for its iconic vodka bottle.

Laura joined five other finalists and was invited to produce her design on a 50cl Absolut Original glass bottle live at the show, with the pieces exhibited in advance of the winner’s being chosen. 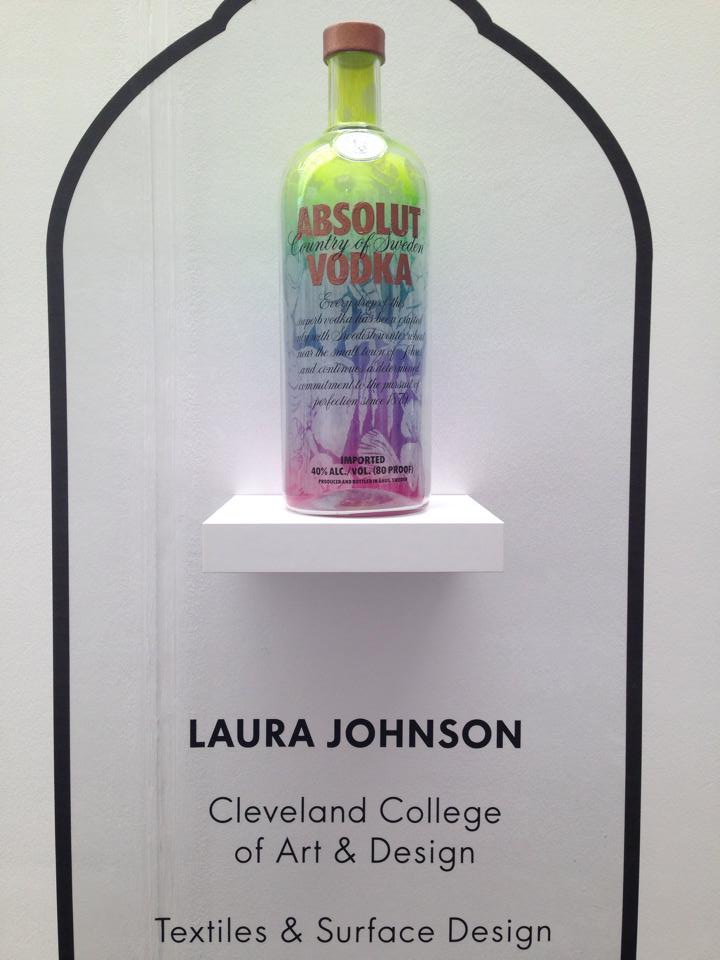 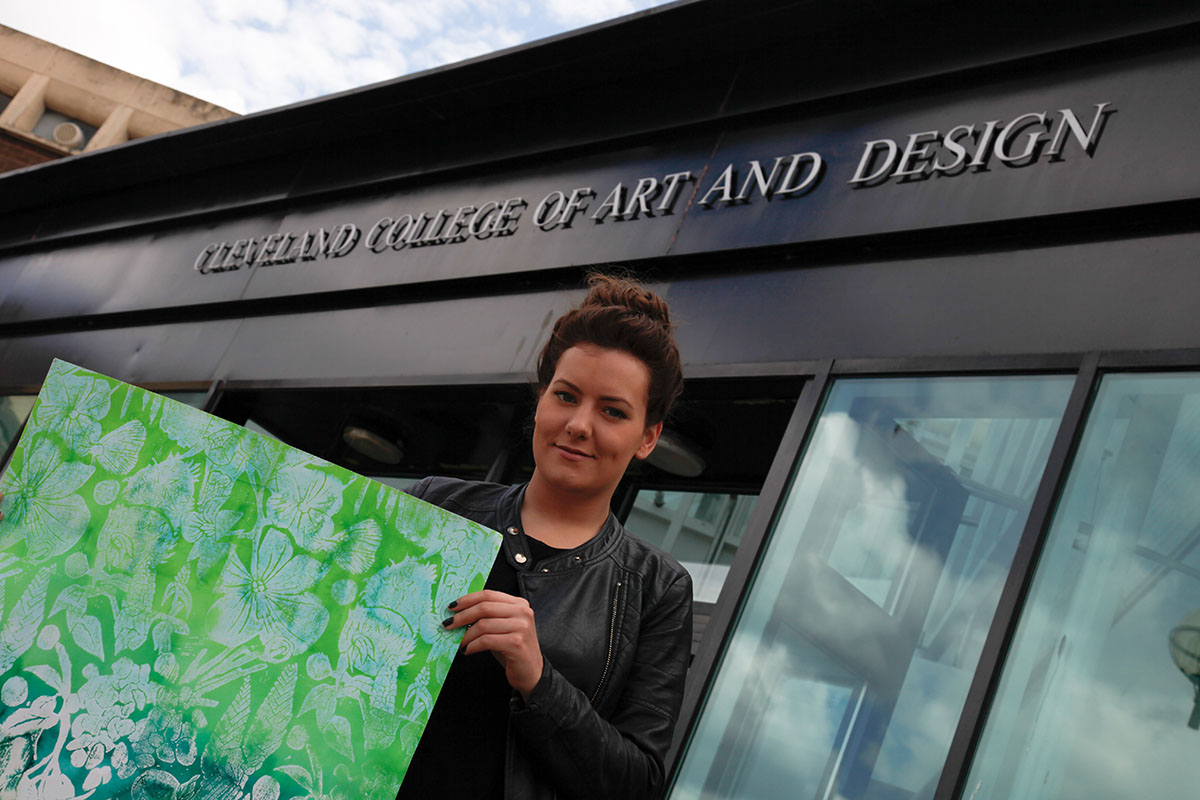 Speaking about her achievement and the inspiration behind her design, Laura said: “I couldn’t believe it, because I was never expecting to win, and it is the first thing I have ever won!

“My influence for the design came after a trip to Thailand last summer, so for my final major project I featured tropical designs, and studied and specialised in block printing. My design is a created using a linoleum block sheet, and carving the design into it. I created a background and then bleached out the linoleum print onto the background, which I sent in and then had to create live during the show!”

After judging by a jury from New Designers and Absolut, Laura was chosen as the winner and will receive £500 of artists’ materials, and her work will be exhibited for one year in the foyer of the Absolut UK London offices.
Laura credits the course and the tutors for helping her achieve the success. She said: “The textiles and surface design course is great, as you can create your own specialism and really go for it. I first discovered block printing when I began writing my dissertation. I compared traditional hand printing textile design with a modern digital based textile design and quickly became obsessed with the traditional, hand crafted and quite labour intensive technique. I just love the end result and personal qualities connected with this approach, which lead me to block printing in my final degree project, and this is now what I want to do after graduating.”

Laura has set up her own hand printed interior textile business called Pattern Pig, which she was able to set up in a studio with the materials won from the competition to produce hand block-printed fabric products.

Laura added: “We took turns manning two stands at the show. I was so overwhelmed by its size; I didn’t see everything, even in a week! It was an amazing experience and the buzz was great.”

The show features everything from textiles and jewellery to product design and illustration and takes place at the spectacular Business Design Centre in London, the world’s capital of design.

Jayne Hemmins, Textiles Programme Leader at CCAD, said: “I’m absolutely delighted for Laura. Her winning design was stunning and showed flair, technical excellence and an exceptional eye for colour and really emphasised her hand printing skills, as she used a beautiful hand cut lino print as part of her design.

“Laura produced the final design prototype by hand over four hours, whilst exhibiting at the New Designers exhibition and I’m certain that Laura will go on to have a hugely successful design career.” 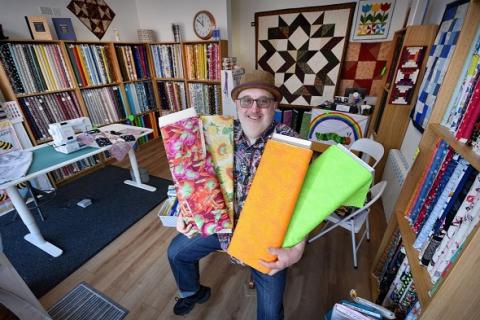