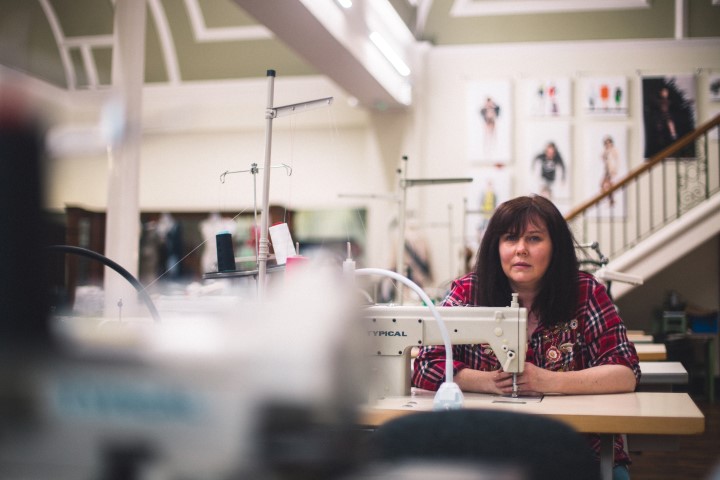 The announcement of next year’s Spice Girls tour sparked fond memories for a costume lecturer at The Northern School of Art, of the outfits she designed for the group when they first started out.

Jane Havakin, programme leader of the School’s Costume Interpretation with Design degree at its university-level campus at Hartlepool, recalled seeing the group performing in her designs on Top of The Pops in the 1990s.

She remembers first meeting the singers before they were famous, just before they had their first number one hit with ‘Wannabe’ in 1996.

They approached her to borrow outfits she was showing at a fashion trade event.

“I turned them down to start with,” Jane said.

“Wannabe singers and novice actors as well as well-known celebrities looking for free clothes are a common feature of the industry shows.

“They told me that they were going to be the biggest band in the world and I wasn’t entirely convinced.  I finally gave in, though, and my sales went up when they proved me wrong about their success!”

Jane meanwhile had recently been named as the Best Avant Garde designer in the UK in a competition run by the British Design Council and Clothes Show Live.

“One of the judges was Mary Quant and I got to spend the day with her, which was incredible.”

As part of the prize Jane was flown first class to Hong Kong where her designs were shown in a catwalk show alongside Vivienne Westwood designs.

“It was a great experience,” Jane added. “It’s good to share with my students now, to give them an insight into the industry.”

Her clothing designs then went worldwide including supplying Harrods and Galleries Lafayette from her Billingham base.

“I was on the train down to London a lot,” she added.

Alongside the Spice Girls she also chalked up other celebrity clients including dressing Zoe Ball when she was on Channel 4’s The Big Breakfast, whilst Cat Deeley was Jane’s model before both of their careers took off.

After running her successful fashion business, she moved into teaching to share her expertise.

She still puts her industry contacts to good use for students on the costume degree course she currently runs at The Northern School of Art, where every student gets the chance to work on a live assignment for a real client out in industry.

They also have the chance to do work experience for a wide range of projects which recently included a stint in the wardrobe departments of BBC Three drama Killing Eve.

Students on the course learn how to create anything for the entertainment industry that characters wear on stage or screen including recreating realistic blood and sweat stains and bullet wound holes for costumes.

The bespoke range of skills covered include corsetry, tailoring, mask-making and leatherwork and it is the only UK course to offer a full module on millinery (hat-making).

Jane also maintains an archive of original clothing from the Edwardian era to modern day that students are able to handle to learn about traditional construction techniques.  Along with the millinery skills they study, they are then well-placed to recreate historical costumes accurately for period films and TV dramas.

“We are so proud of our course,” Jane commented. “Students come from around the world as well as all over the UK to study with us and most then go off to work in some amazing places and have great careers.”

Alumni from the course have worked on a huge range of dramas including ITV’s Victoria, the BBC’s Sherlock Holmes starring Benedict Cumberbatch and Wolf Hall, starring Damien Lewis and Disney’s Rogue One – Star Wars film.

“If Victoria Beckham isn’t designing the clothes for her former bandmates for their tour next year I can recommend lots of very talented students and former students who would make some fabulous outfits for them,” Jane joked.

Further details about Jane’s BA (Hons) Costume Interpretation with Design course and other creative degree level programmes at The Northern School of Art are available at www.northernart.ac.uk

Open days to view the facilities and talk to staff and students at The Northern School of Art’s university-level campus in Hartlepool take place on Saturday 23 March 2019, Saturday 8 June 2019 and Thursday 4 July 2019.