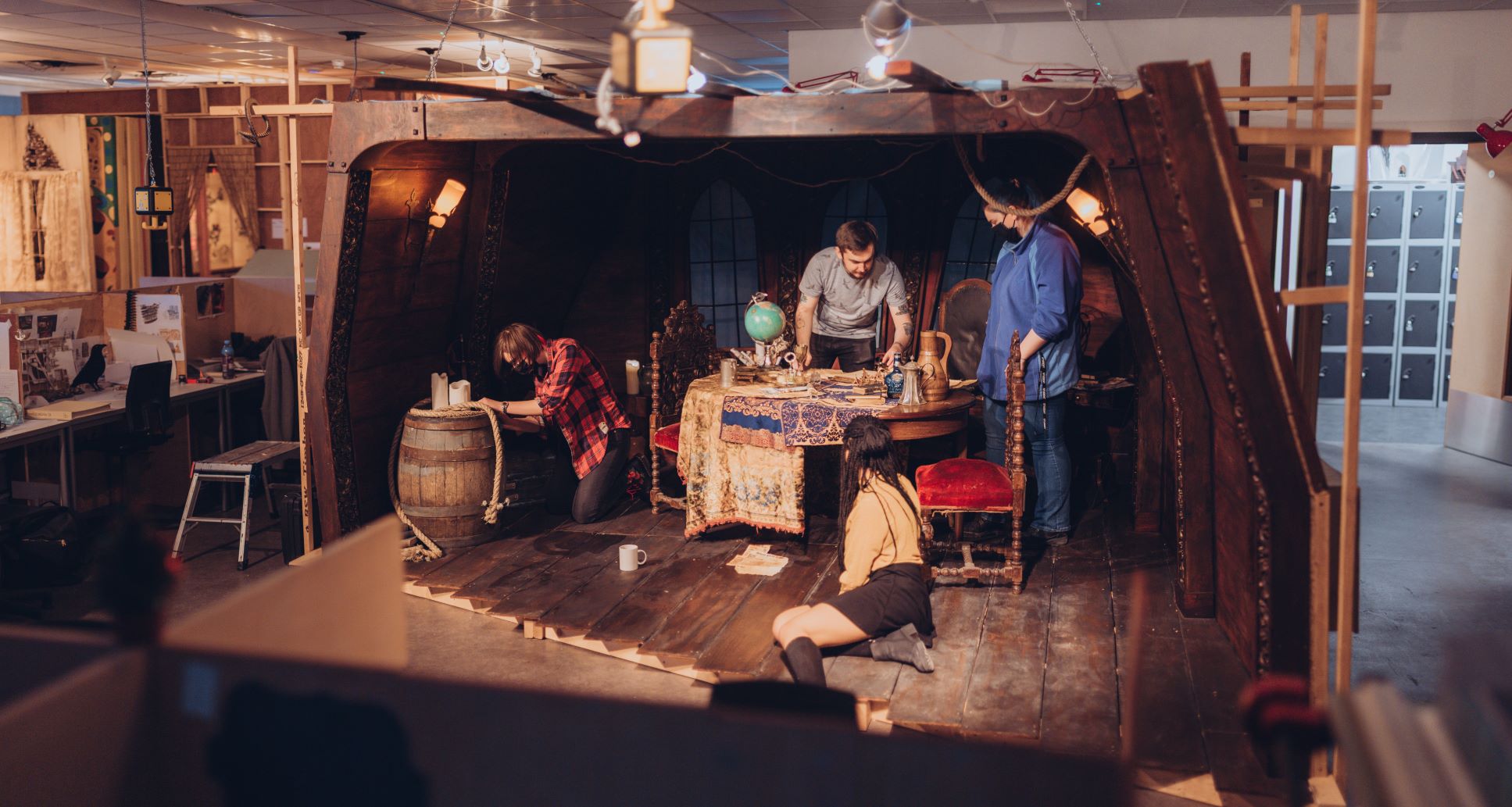 Production design students at The Northern School of Art have been exploring the golden age of piracy to create a full-size TV studio set of a pirate ship captain’s cabin.

The atmospheric interior of the 17th Spanish galleon has been painstakingly crafted by a team of second year students as part of their Research, Design and Construction module for the School’s BA (Hons) degree in Production Design for Stage and Screen at the university-level campus in Hartlepool.

With a brief to build a set that reflected the richness and detail of the interior of the cabin of a captain who has spent many years sailing the seas, plundering a wide range of treasures, the students filled the set with an exotic mix of delights. 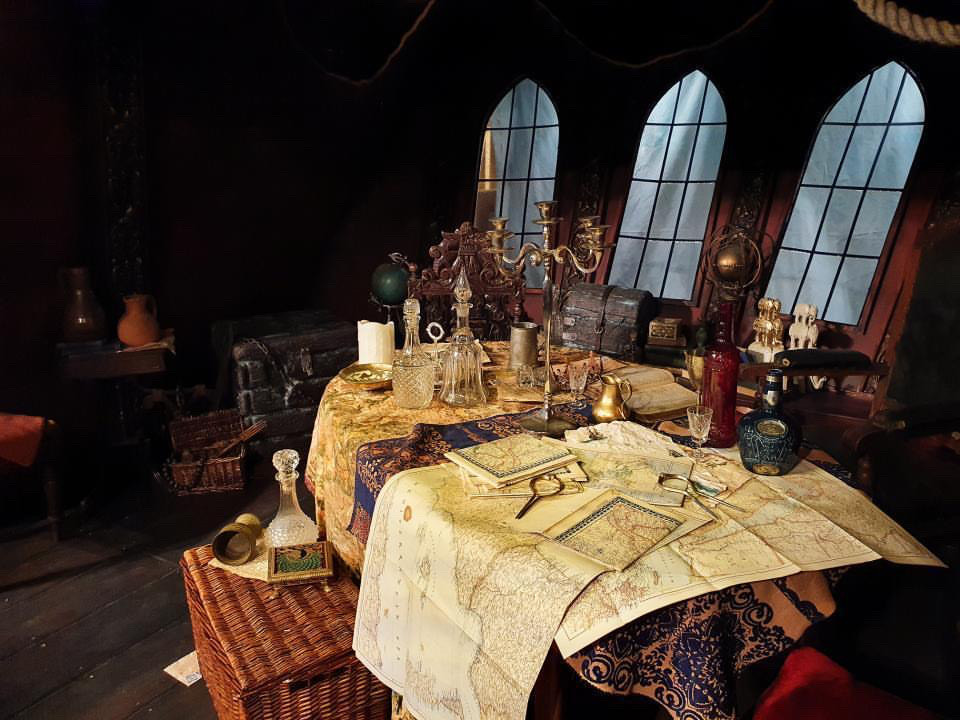 The students created the stunning set, from the initial concepts through to research into the period to create historically accurate final designs and the build itself, in just fourteen weeks, finishing just before they left for the Christmas break.

It has been completed to industry-standard suitable for 4k filming and could be used in a real TV studio.

It has also been created sustainably, using materials recycled from previous sets in accordance with the film and TV industry’s albert sustainability guidelines.

Working against the backdrop of the pandemic and the second lockdown provided an extra challenge for the students who adapted to work in socially-distanced ways. 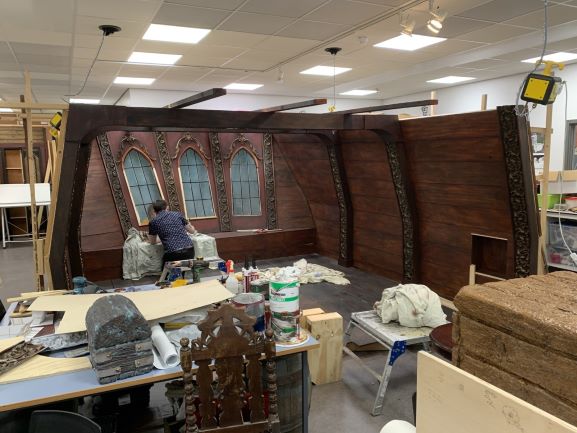 Student Holly Speakman, from Hartlepool, said: “It’s been an incredible opportunity to work on a full-scale set and as a group. The experience will really help when we get into the industry.”

Kerry O’Connor, from Thornaby, pictured below second on right, agreed saying she had chosen the course because she “liked to create big-scale things” and Sophie Skillcorn, from Normanby, pictured below far right, said it had been a “great opportunity to also get an extra level of skills.” 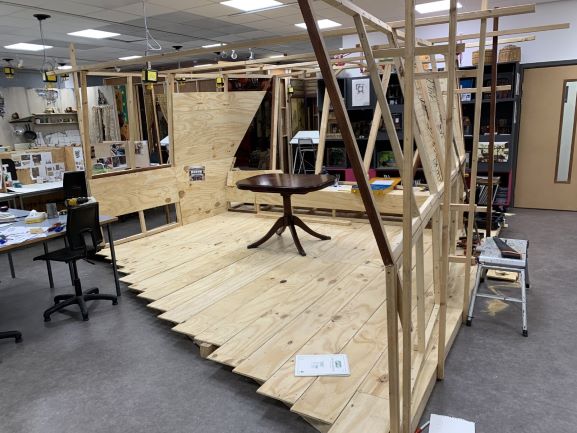 Francesca Pajovic, from Nottingham, added that “we had to problem-solve and find solutions as we went along which replicates how we will have to work in the industry.”

Shania Hurd, from Birmingham, pictured below far on left left, found that “doing a big build has helped me discover where my skills lie,” noting that the build also required them to even “make plastic look like wood!”

The breadth of skills used was also what Holly Russell, from Leeds, pictured below second from left, enjoyed saying: “I liked that we were able to explore every aspect, from the start to the end.”

The School’s Production Design Lecturer, Norman Austick, was impressed with what the students have achieved: “They’ve worked brilliantly together and didn’t have a cross word in fourteen weeks. Learning how to communicate and respect each other whilst working as a team will serve them well after they leave and move into work where they will have to work with a wide range of people.

“It’s been challenging working in groups in the pandemic but we have had strict protocols in place to ensure safe working and we have the benefit of not having huge student numbers so it was achievable.” 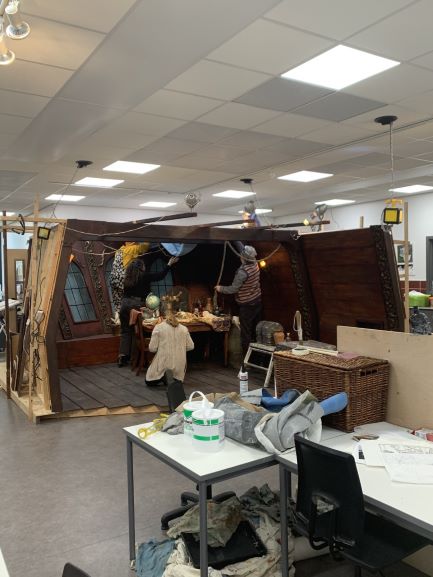 The Northern School of Art’s BA (Hons) degree in Production Design for Stage and Screen gives students the skills required of professionals working in the film, TV and theatre industries. Undergraduates work over three years to develop niche skills such as: prop making, sculpting, concept art and character development designed to give them a competitive edge when applying for roles after graduation.

For further information about the course visit https://northernart.ac.uk/study-with-us/hartlepool-campus/degree-fda-courses/ba-hons-production-design-stage-screen-2/